Arcadia landed in London in a blaze of colour and lightning last night, ahead of their May Day Bank Holiday weekend spectacular as details of an Aboriginal collaboration were announced alongside a Hospitality takeover of the infamous Spider and the lineup for the Bug Stage.

The heavyweight festival collective tested signature elements from their award winning Metamorphosis show at Queen Elizabeth Olympic Park, marking the countdown to ignition in just over a fortnight.

One of the otherworldly creatures from their acclaimed performances soared above the London skyline beside the ArcelorMittal Orbit, as the Lords of Lightning burst into a titanic electrical battle, harnessing 4 million volts into a mesmerizing display of white hot power.

As Olympic Park began its transformation, Arcadia revealed that their collaboration with an Aboriginal tribe – the Wadjuk Noongar would be performed in London. The Yallor Keeninyara sees one of the world’s most ancient ceremonies fused with Arcadia’ molten steel, flaming explosions and all enveloping bass. A profound story of connection, unity and worlds meeting – it is also a moment of pure primal celebration.

Hospitality are set to board the Spider in a surprise reveal, with originator Danny Byrd taking the controls alongside a back to back session with Whiney and Unglued as MC GQ brings the ruckus on the mic. Following the success of this year’s Hospitality at the Dock, the Hospitality crew will stomp into Queen Elizabeth Olympic Park to test their arsenal on the biggest beast in town.

Celebrating their 10th anniversary, Arcadia’s 50 tonne mechanical Spider is headed to East London alongside a new indoor experience, the Reactor, a host of innovative sculptures, an Aboriginal song, and thousands of revellers dancing to some of the finest DJ’s and live musicians. 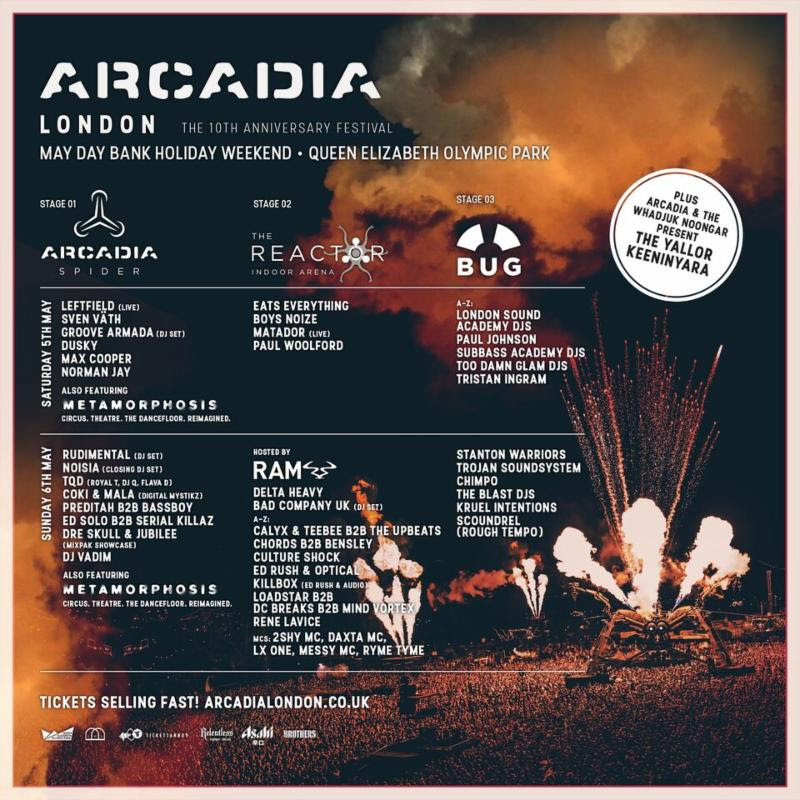 The shows are the ultimate Arcadia experience, uniting audiences from all walks of life on a wave of wonder, before some of the world’s finest DJ’s and electronic musicians channel the night into a euphoric crescendo.

About Metamorphosis
Building on Arcadia’s transformational use of materials, the acclaimed Metamorphosis show explores themes of change, featuring the Spider at its center, car-sized robotic spiders crawling above the crowd, spider eggs transported overhead, bio-mechanical creatures pulsing with light, strange tentacled beings swooping from the skies, musical lightning fired in the midst of the crowd, an outer ring of flaming towers, a signature soundscape and unique technological innovations.
The 360 degree immersive experience shot to the top of fan favourite lists at Glastonbury where Arcadia attract tens of thousands of people a night. Recent years have seen Arcadia travel the world, landing the Spider on four continents, from downtown Miami to collaborations with the Aboriginal peoples of Western Australia on the performance of an ancient dance not seen in public since 1901.