PLUS MANY MORE TBA

For their huge 2018 third edition on Saturday 9th June, Junction 2 festival are broadening their horizons and casting the net across a more extensive and diverse selection of artists from all corners of the world- Veterans and newcomers, superstars, burgeoning young talent, rare appearances and fantasy B2Bs. As well as familiar faces and your next favourite DJ that you haven’t even heard the name of yet.

Brushing on all sub-genres of electronic music from leftfield house to floor-pounding techno, downtempo electronica to bone-shaking basslines, but all under the umbrella of techno, that they’re well known for. The first artist announcement is a sign of things to come, with more additions set to follow in the same vein.

These artists and more will be spread across five custom-designed stages, all uniquely assimilated into the picturesque landscape of Boston Manor Park in West London. From industrial concrete structures, to areas of outstanding natural beauty. Junction 2 are going bigger, bolder and more elaborate than we in 2016 and 2017, without wandering far from their core focus: cutting-edge production, crystal-clear sound and exceptional organisation, alongside an unrivalled line-up with extended set-times at an exclusive, awe-inspiring setting.

Out of the five stages Junction 2 welcome back Drumcode and SONUS festival as two of the stage hosts for 2018. 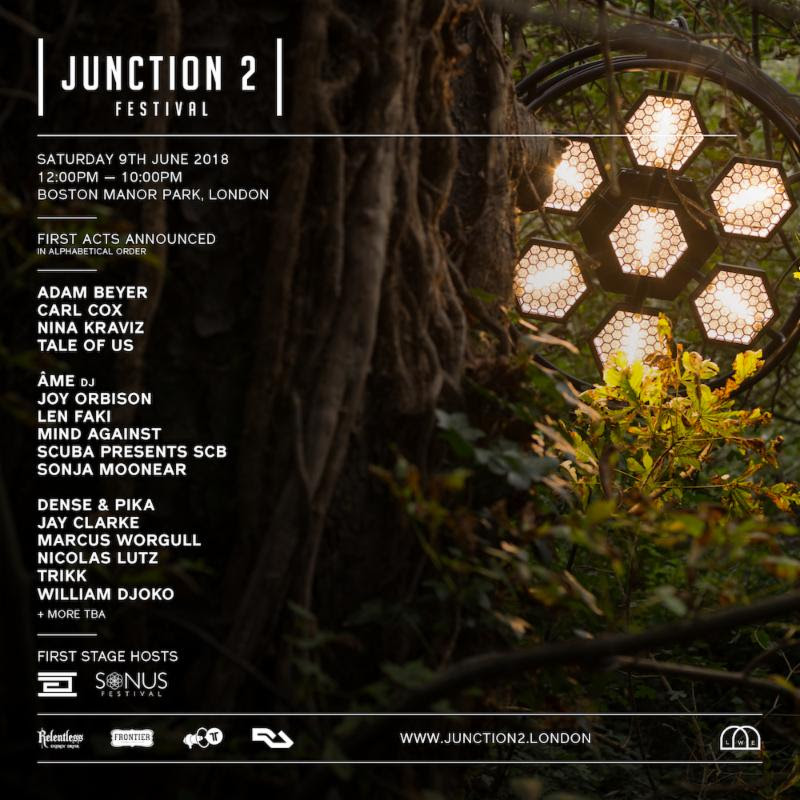 “Junction 2 was proof that raving in London can still have a special kind of magic.” – RESIDENT ADVISOR
“London’s Best Techno Event” – MIXMAG

“One of London’s most unusual stages.” – TIME OUT
ALL TICKETS AVAILABLE FROM: www.junction2.london
ABOUT JUNCTION 2

Junction 2 is an underground electronic music festival organised by LWE. The debut event took place on Saturday 4th June 2016 under the M4 motorway bridge at Boston Park Manor, West London. Their sell-out second edition took place on Saturday 10th June 2017, featuring a new main-stage scale arena hosted by Sonus and woodland stage hosted by Into The Woods as well as a return of The Hydra’s intimate 360° arena, LWE’s Warehouse and Drumcode’s striking stage located underneath the flyover.