For the past 4 years Klockworks showcases represented talent from the label’s roster while focused around the vibrant visual display of the fabulous Heleen Blanken. This year Klockworks’ new concept PHOTON opens up to friends and colleagues whose productions and DJ sets label head Ben Klock admires, from up and coming artists to the legends of the industry.

The concept puts emphasis on the notion of a photon, to present a multi-sensory experience placing attention on the marriage between sound, light and architecture and how these elements combined, influence our experience. Printworks in London was chosen as the location for the launch as unique, vast, industrial spaces are a focal point for the play of light. As each venue selected for the series will embrace it’s own distinct features, the light show will differ in each setting.

Brought to you by Printworks London and The Hydra, tickets are on sale now. 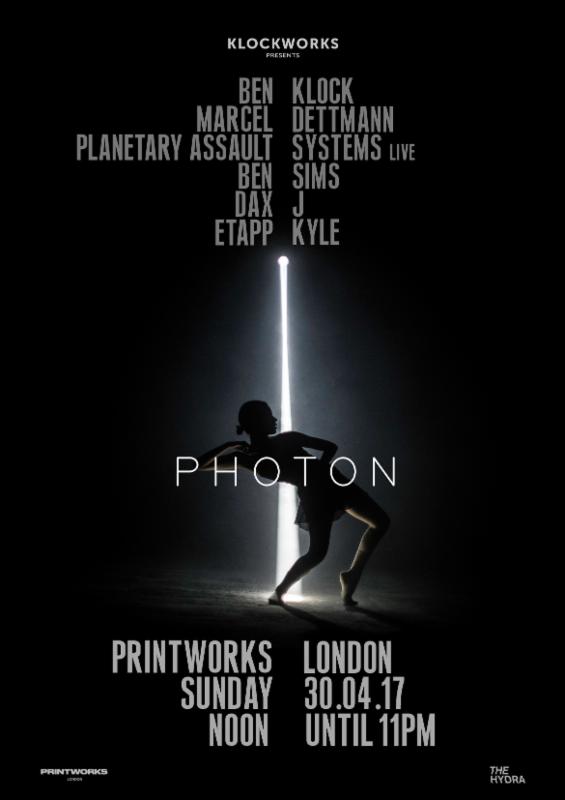 NOTES TO EDITOR:
PRINTWORKS LONDON is an experimental, multipurpose cultural hub, licensed for events up to 5,000 capacity which launched on 22nd November 2016.  Printworks London supports the fully range of creative industries, with plans to host food festivals, exhibitions, immersive theatre, orchestral performances and more.PRINTWORKS LONDON ISSUE 001 is a series of Saturday daytime shows running from midday to 10.30pm from 4th February 2017 to 30th April 2017.BROADWICK LIVE  is an international team of creative people based in London who, in partnership with Global Radio, own, create and produce a portfolio of award-winning festivals and events including Festival No.6, Field Day, Snowbombing, Boardmasters and Lost Village.

THE VIBRATION GROUP is a collective of diverse, creative event businesses, specialising in venue management and ownership, production services and consumer facing event brands. The Vibration Group includes Xcite Venues, the company that manages and curates the event spaces at The Printworks.

THE HYDRA have in only four years cemented themselves as one of London’s most potent club brands. Founded by Electric Minds label boss and off-location event pioneer Dolan Bergin alongside programmer Ajay Jayaram (previously booker for The End and Cable) – they were soon joined by operations manager Alex Beattie to form a collective who’ve grown to be synonymous with the global electronic music scene.