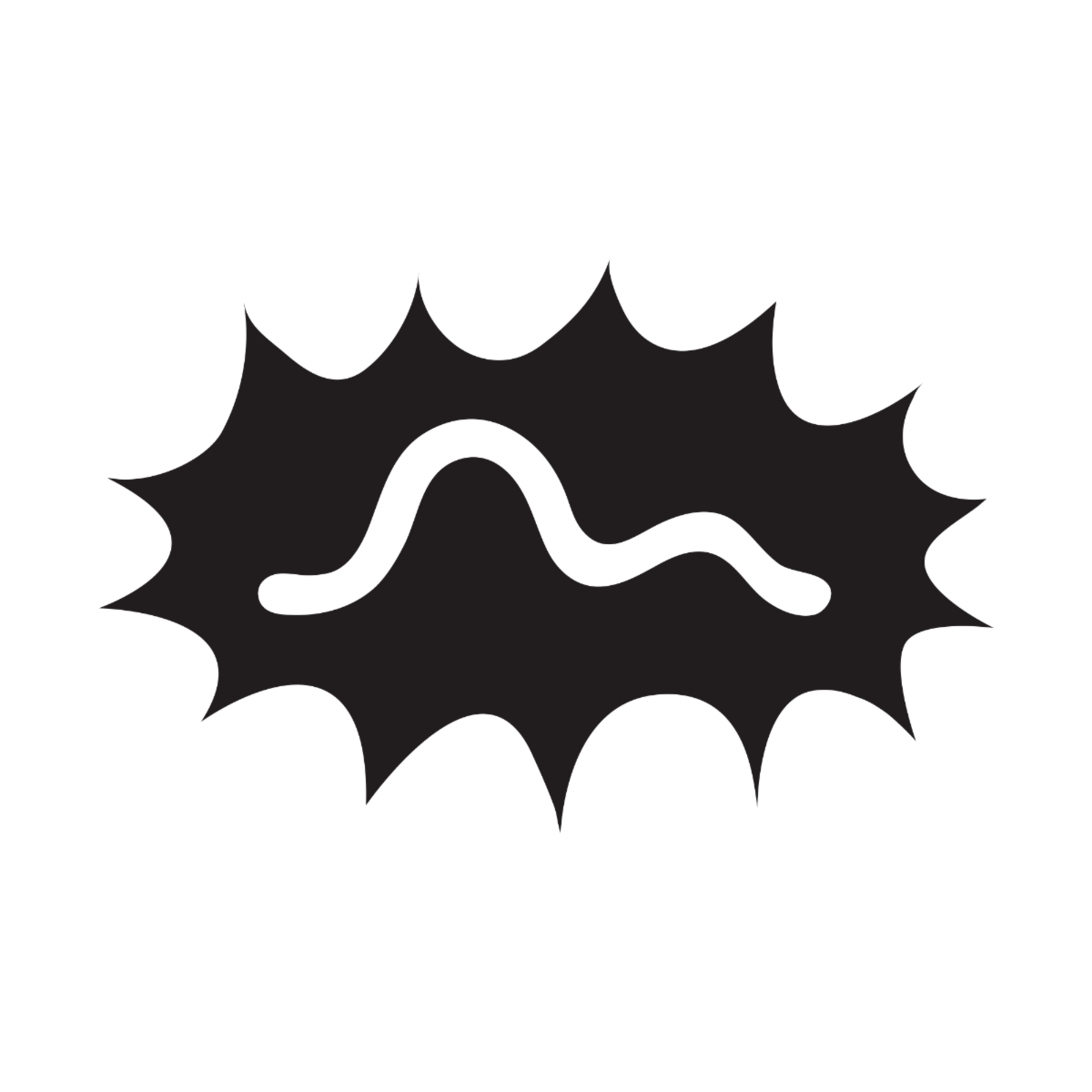 Heading into its sixth year, Monticule finalises its stunning lineup for 2020. Having already announced a tantalising selection of names, the festival welcomes further talent from across the dance music spectrum, featuring showcases from an array of influential labels and the scene’s most exciting trailblazers. With activities away from the dancefloor also on offer, Monticule continues to boast a diverse and global programme for all attendees that’s simply not to be missed.

The previously announced and eagerly anticipated Malka Tuti showcase expands to 24 hours, with I’m A Cliché label boss Cosmo Vitelli and Hugo Capablanca joining the likes of Khidja, Asaf Samuel & Katzele, Shari Vari live, Full Circle, Fantastic Twins live and Optimo (Espacio) in taking dancers on a dizzying and ambitious trip across day and night. The unmissable showcases continue, as the pioneering Zozo, mesmeric Eva Geist live and Sacha Mambo play in the prestigious name of Macadam Mambo and Andrea live, Zenker Brothers and Surgeon represent the iconic Ilian Tape sound, the latter having just released the twisted techno of The Golden Sea EP on the imprint earlier this month.Acclaimed Berghain resident Efdemin makes his Monticule debut and it’s destined to be one for the history books, while supreme selector Lauren Hansom touches down to showcase her vast record collection and strictly individual spirit with Multi Culti boss Dreems demonstrating his “multiply your mind” label ethos with thrilling results. Berlin’s LackRec crew is well supported thanks to slots for Fadi Mohem, Marie Montexier and Victor, along with Benedikt Frey, who will treat dancers to his unique channeling of electro. DJ Dustin and Vlada from Giegling will make appearances across the weekend, as well as activist of the Såo Paulo LGBTQ scene, Cashu, whose politically-charged set should make for a festival highlight. 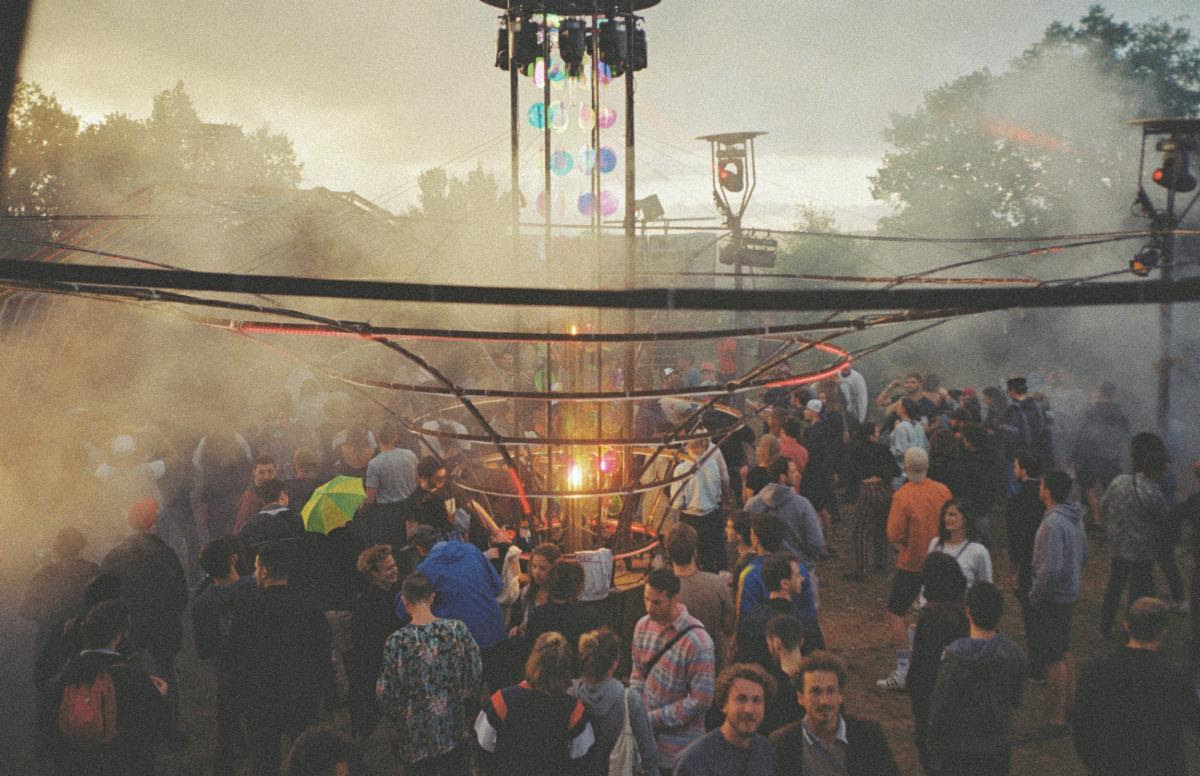 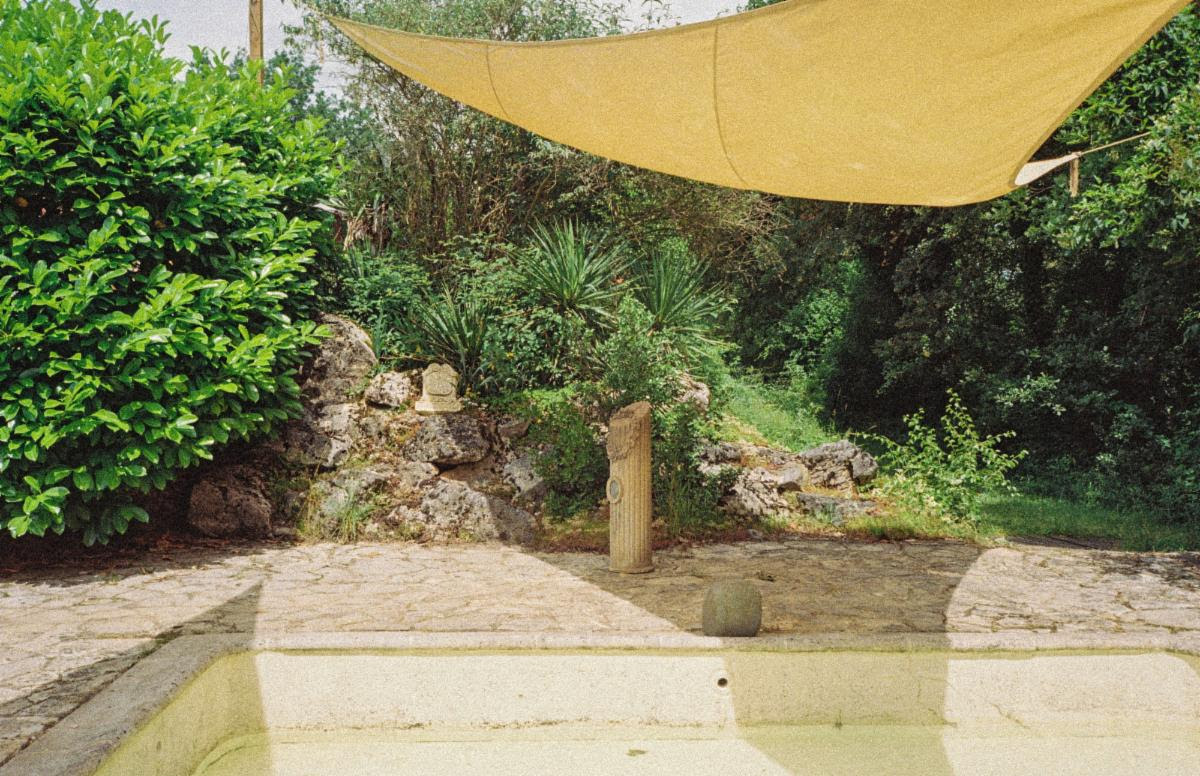 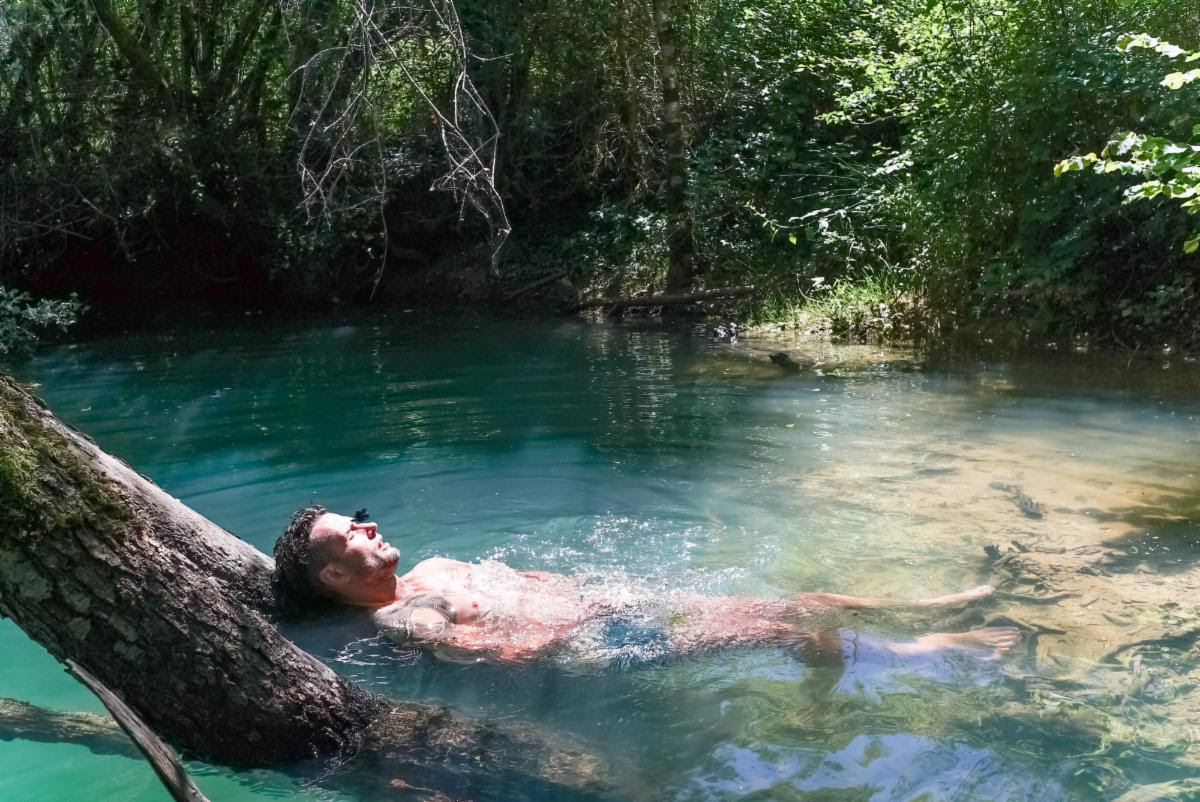 Further features can be found away from the dancefloor and within Monticule’s quieter corners, as the nearby swimming hole and picturesque waterfall entices weary dancers to take a peaceful dip or limber up during yoga lessons. Thrill seekers can get to grips with a skateboard mini rap, while festival goers can also tap into their creative side through painting workshops or turn their gaze to the sky with astronomy classes.

Only 1h30 drive from Toulouse, festival-goers can also sample the famed cuisine and wine of the area at their leisure, with local producers and food trucks serving up the tastiest grub throughout the 5 day stay. 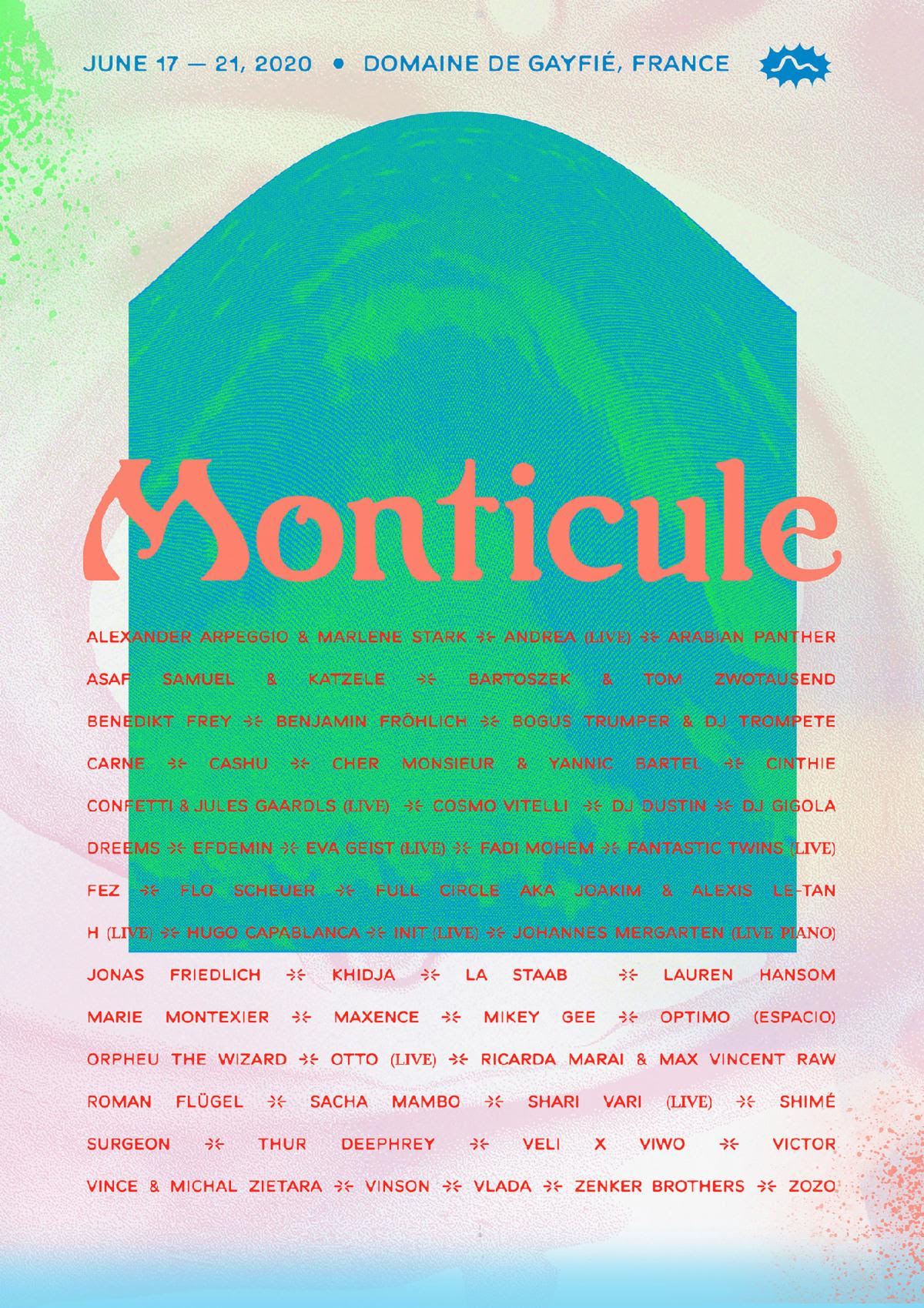 ABOUT MONTICULE
In 800 AC monks settled down at the foot of this hill. Ruins on the elevation nearby the Spring of Lantouy, give us an idea of a harmonic spiritual life in nature. Many years after the monks, lord Gayfié installed a farm on the hill and constructed several buildings which are still standing to this day: the barn (Grange), his villa, the pigsty (porcherie) and the sheepfold (bergerie). After his passing, the Domaine de Gayfié was home to a horse farm, a truffle plantation and, pretty close to our presence, St. Etienne Football Club. Luckily for us, the guy in charge of managing the construction of 200 bungalows and an elevator down the hill, took all the money and defected to Mexico.
In 1991, after many years of being left untouched, the tourist Residence Domaine de Gayfié was installed and in 2001, Lilo finally took over the place. In 2015, her son Richard and his greenhorn friends decided to organise a slightly oversized home party with Funktion Ones and international booking on top of that hill and called it Monticule Festival. When you read these lines the fifth edition will already be in the making. The baby has grown a bit. Let’s take a breath to worship the time and space which was given to us. We are all just particles on this ground. Maybe the monks are coming back soon.
+++
“The idea of Monticule was always to create a festival, where we would like to go ourselves. Quality not quantity is our the credo and so it’s not just the music selection, but also the stages, drinks, workshops and atmosphere that follow our “tailor-made” line. Our aim is to make people’s souls and bodies feel better when they leave the festival than before they arrived”
Eric Schönemeier [Monticule]
“It’s one of the best festivals ever, the dedication of the crew is simply phenomenal. Each detail is essential.”

“This place is so beautiful, I can’t believe it actually exists.”
Tijana T

“Hug a tree, even if it’s for the first time. Liberate yourself from the awful of evils, embrace musical wilderness while staying calm and surrounded by friends and kindred spirits. It might be the most serene festivals around. Monticule.”

“I think it’s the best festival of my life.”

“Of course, you can party, but it’s also a place of mindfulness, tranquility and reflection.”

“To preserve at all costs this freshness, the pleasure to contemplate the magnificent valley of the Lot while discovering the best of the current electronic music in a family atmosphere.”
Trax Magazine
“…in just five short years, Monticule has managed to nail those ineffable qualities that make people return again and again.”