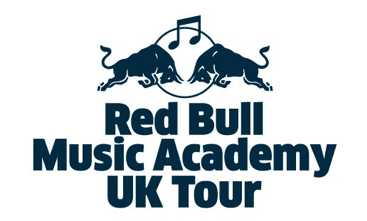 Adding further strings to Red Bull Music Academy‘s month long UK wide tour, RBMA Radio prepares to host a series of live broadcasts across Glasgow, Manchester, London and Bristolfeaturing an extensive selection of cutting-edge programming and live radio broadcasts. With over 192 artists featuring on the Tour roster, that run the gamut from global pioneers to top tier UK talent, RBMA Radio can flex the very best of its collaborative skill set for a truly unique blend of live transmissions. Each broadcast will feature artist interviews followed by exclusive live performances, with each show available for audiences to witness firsthand or stream online via www.redbullmusicacademy.com/uktour or www.rbmaradio.com.

Kicking things off, RBMA Radio: Live in Glasgow will be christening the airwaves at local institution Sub Club’s brand new venture Sub Hub (29th March).Airing the first live broadcast from the space, audiences are invited to check in online or come on down and rub shoulders with homegrown talent such as Sub Club residents Harri and Domenic, RBMA alumna Nightwave, hip hop producer S Type and much-hyped young producer Inkke. Offering up an inviting mixture of live sets and discussions, this RBMA Sunday breakfast club is the perfect cure for lurking Saturday night demons.

For RBMA Radio: Live in Bristol (4th April), what better place to set up shop than cult record store Idle Hands for a weekend of serious vinyl perusing. This live broadcast is an open forum for record junkies to come and browse against a backdrop of luminary Bristol residents such as Appleblim, Chris Farrell, Felix Dickinson alongside Bristol’s finest emerging acts such as Shanti Celeste andTroy Gunner. For those who prefer to listen in surrounded by their own prized collections, you can just join them all online.

Next up, RBMA Radio presents High Frequencies: Live in London (11 April) convening some of the capitals most iconic pirate radio stations for a one-off broadcast to celebrate their critical contribution to UK music. The show will be transmitted old-school style on its very own FM frequency reaching a 5-mile radius across east London, with Kiss FM (Norman Jay MBE + Gordon Mac), Phase 1 (Fabio + Grooverider), Flex FM (Deekline), Station FM (DJ Keithley & Mr Bantan) amongst some of the pioneers joining this one-off show being held at London’s iconic ArcelorMittal Orbit in Queen Elizabeth’s Olympic Park. Upping the ante, Red Bull Music Academy is working with Michael Finch, the UK’s leading collector of pirate radio tapes, to curate a series of one-off tape decks. These will be available on the lower platform of the Orbit for people to dip into at their leisure, offering an immersive audio journey throughone of the most exciting periods of UK dance music. Tickets are available for this RBMA Radio special, but those who can’t make it can tune in and join the festivities via the airwaves.

Finally, a sonic gateway to each leg of the Red Bull Music Academy’s UK Tour comes in the form of an additional tetralogy of programmes hosted online on RBMA Radio. These hour-long shows, released the Tuesday before each weekend, will celebrate the cultural legacy of these four cities, taking a deep look at their musical past, present and future. Hosted by heroes from the local music scene, Glasgow sees infamous DJ duo Optimo take the reigns, Bristol welcomes Tectonic label head Pinch, and London features legendary grime MC D Double E, while d’n’b don Marcus Intalex hosts the Manchester edition, completing RBMA Radio’s homage to what makes each metropolis such a hotbed of cultural triumph.

EVENT: Glasgow Belongs To Me with Optimo

EVENT: Bristol Belongs To Me with Pinch

EVENT: London Belongs To Me with D Double E

EVENT: Manchester Belongs To Me with Marcus Intalex

Set recordings from several of the Red Bull Music Academy UK Tour events will also be released during and after the Tour.